The weak built-in graphics accelerator that you find on computer motherboards these days can run circles around Nvidia’s first video card. Back in 1995, Nvidia released their first product, the NV1, with a retail price ranging from $249 to $300. It was sold under the name Diamond Edge 3D and was to be installed through a PCI slot. The NV1 used VRAM, which was the standard at the time before the better SDRAM came along. The video card came in two series, the 2000 series and the 3000 series. It was available with either 2 megs of memory or 4. And you thought the 32 megs of memory on your old Geforce 2 was puny! 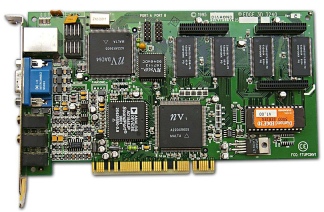 Even back when they first started out, Nvidia was an innovative company. They created the NV1 to be an all-in-one video card . It had a built in 16-bit wavetable audio component to play midi music. PC games back then used midi for background music and sound effects. It also had built in I/O processing and a couple of joystick ports, which was compatible with Sega Saturn controllers. All this sounds great on paper, but it made the NV1 costly to build and was expensive to buy. The Nvidia N1 could do some impressive things at the time such as gouraud and phong effects plus MPEG video playback which we take for granted today. It offered a resolution as high as 1600×1200 and a maximum color output of 32,000. The maximum resolution was not practical however, as many PC games back then don’t even have a setting to play at 1280×720. Some not even at 720×480!

Problems with the NV1

The NV1 was ahead of its time in a strange way. It excelled in 3D gaming, but was sub par when it came down to 2D games, which was still the dominant type of game on both PC and video game consoles. Even though people at this time have already started using windows, most PC games were still in 2D and played on MS-DOS. The worst part of all was that the NV1 used quadratic texture mapping, a defunct rendering technology. While this type of technique took less computing power, it was a hassle to program for and made things such as collision detection hard to get right.

Minimum Requirements for the NV1

Nvidia’s NV1 aka Diamond Edge 3D did not too well in the retail market. And it got worse shortly after Microsoft announced the first Direct X specifications, which would become the industry standard API. This did not bold well for the NV1 since it used quadratic texture mapping and was not built to Direct3D’s specs which was part of Microsoft’s Direct X. Nvidia came out with updated drivers, but it did little to help.

Nvidia didn’t take off until they came out with the RIVA 128 video card, which was faster and cheaper than anything 3dfx had. 3dfx was the leading video card GPU developer from the early to mid 90’s. After the success of the RIVA 128, Nvidia began dominating the field 3dfx once owned and bought out 3dfx to become the Nvidia that we know today. Next time you see a video game on a cellphone or PDA and think of how bad it looks, remember, Nvidia’s first video card probably couldn’t have rendered it.

A Quick Lesson In Nvidia's History